The extent and severity of grub damage can very from minor to severe. There are several factors that influence damage, but as a general rule it is most severe when infestation levels are high. The damaging life stage of the white grub is during the larvae stage when it feeds aggressively on the roots of the grass. Knowing when and what to look for is important in order to identify damage or help prevent it from happening. 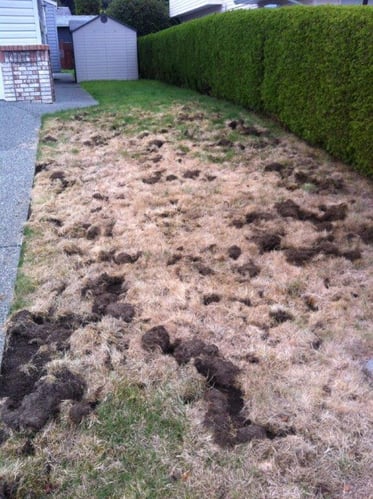 Winter - White grubs overwinter as 3rd instar larvae. They do not feed during the winter. They move deep into the soil below the frost line.

Spring - White grubs make their way back up to the rootzone and continue feeding for a short period. They are fully grown at this point. It is common to see damage in the spring.

Summer - The white grub stops feeding and enters into the pupae stage where it transforms itself into an adult beetle. Adult beetles emerge during the summer months and lay eggs. The eggs hatch during late July early August and early 1st instar larvae begin feeding on the grass roots.

Fall - White grub larvae continue to grow and move into their 2nd and 3rd instar. feeding is aggressive into the late fall season. As winter approaches the larvae stop feeding and move deep into the soil to prepare for winter. It is common to see damage in the late summer early fall.

Damage caused by white grubs can initially resemble drought stress which confuses many homeowners that don’t suspect grubs. As the grubs continue to feed and destroy the root system these areas begin to wilt and turn brown. Turf that has been severely damaged no longer has a root system and can be easily lifted away from the soil as there is no longer roots to anchor it. This makes it especially easy for animals to pull back, rip and tear sections of the lawn away.

Damage as a result of raccoons, skunks and birds can often be the first sign to a homeowner that something isn’t right and white grubs may be present. Animal damage can be much more extensive than that caused by grubs. The animals dig away ripping turf back to get at grubs for a food source. Animal damage can be very frustrating as it is difficult to prevent from happening day after day.

Re-seeding after damage has occured