Early instar White Grub damage is becoming increasingly evident in lawns across Canada and the USA this time of the year. White Grubs are the larvae life stage of several destructive turfgrass insects including the European Chafer, May/June Beetle, and the Japanese Beetle. During the larvae life stage the white grubs aggrssively feed on the roots of the turfgrass plant causing major damage to lawns. The Adult beetles (European Chafer, May/June Beetle, and Japanese Beetle) laid their eggs early in the summer and these eggs have hatched, thus the early instar activity of these white grubs.

Early Instar White Grub Activity
For most white grubs, their life cycle takes 1 year to complete and the most damaging stages of their cycle is during the larvae stages which takes place over the fall and into the next spring. As the larvae cycle ends the white grubs then stop feeding and pupate into an adult beetle. After the adults have emerged, they lay their eggs and start the entire process over again.

Major damage can also become evident in lawns from animals, birds and rodents that are searching and digging for these white grubs as food. Often times, the damage created from this digging is much more severe than the grub feeding damage itself.

White Grub Larvae Closeup
White grub larvae are cream white in colour with a tan coloured head, and have 3 pairs of legs at the front of its body. A raster pattern (arrangement of tiny hairs) can be found on each grub larvae at the back end. Depending on how good your eye sight is a magnifying lens may be required to see this raster pattern. The raster pattern is what is used to identify and determine what type of beetle the larvae grub will become. For example an “Open Zipper” pattern indicates the grub will become a European Chafer beetle, and a “V-Shape” indicates it will become a Japanese Beetle. This identification process is important because grub life stages can vary slightly depending on the particular grub species and timing control applications is imparetive to ensure good quality control. 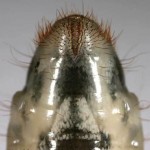